Τhe name rhinoceros means `nose horn’ which is often shortened to rhino. The name comes from the Greek words rhino (nose) and ceros (horn). There are five species and 11 subspecies of rhino; some have two horns, while others have one (source).

Unfortunately, rhino populations are at critical level today due to the demand for rhino horn and subsequent poaching. The current rhino populations are mainly gathered in large protected areas. Wildlife managers, the people in charge of these protected areas, have been using several approaches to secure the life of the animals. One of these approaches includes removing the horn itself; dehorning. Namibia was the first country to use dehorning to protect rhinos from poaching (source).

There are numerous cases where dehorning has proved insufficient to prevent rhinos from falling victim to poachers. The efficacy is dependent on the behaviour of the poachers:

The interaction between poachers and wildlife managers can be described using a game theoretic model. This work was done in 2016 by Tamsin Lee and David Roberts and their game is given by the following matrix, 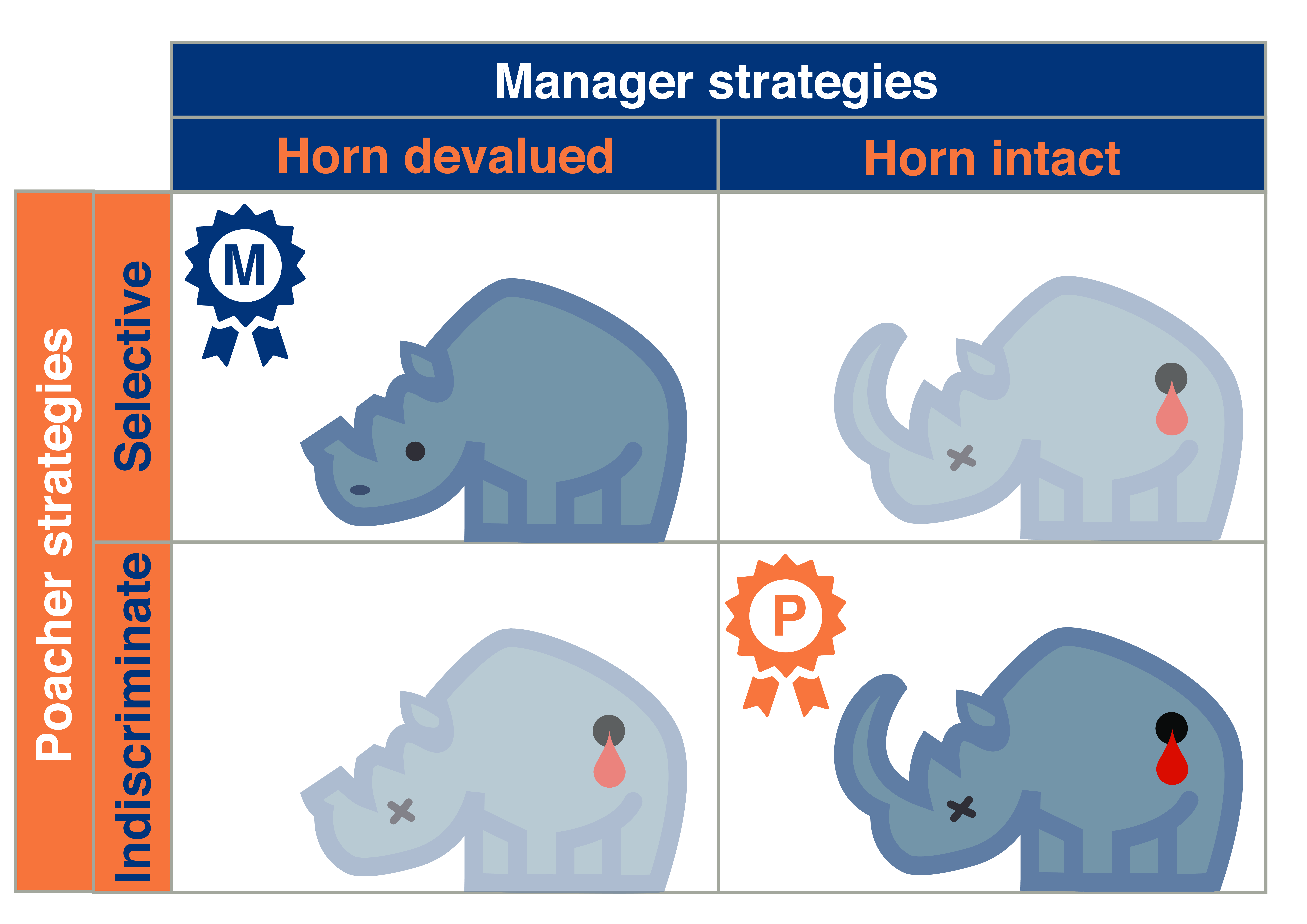 The game is a two players game (manager and poacher). Both player have a set of two strategies. To dehorn or not and to either be selective or indiscriminate. Assuming that both players will behave to maximise their payoff, there are three possible Nash equilibriums of the game. In the 2016’s work the authors studied the following two equilibriums:

Their work concludes that poachers will always choose to behave indiscriminately, and thus the game settles to the bottom right quadrant, i.e., the poachers win!

Their work though did not take into the population dynamic effect of these strategies. For example in a population full of indiscriminate poachers would there be a benefit for a poacher to behave selectively? In 2017, alongside one of the 2016’s work authors Tamsin Lee, we further enhanced that model to allow for cross dependencies across multiple poachers. The game we consider is no longer a two player game but now the players are an infinite population of poachers. The dynamics of these populations have been explored using evolutionary game.

There are three possible population that could be stable. These are,

This is shown in figure below:

Using a realistic and generic utility model we tested the evolutionary stability of these populations. The first set of results, both analytical and numerical, showed that only the population of indiscriminate poachers is stable and further more evolutionary stable. The figure below illustrates some of the numerical experiments. It is shown that for any given starting population everyone converges in an indiscriminately behaviour.

However, our results reveal that it is possible for a population of selective poachers to exist, but for this to occur a disincentive must be applied to the utility of indiscriminate poachers. The disincentive factor can have several interpretations; such as engaging the rural communities that live with wildlife.

Essentially, our results for these model have shown that selective behaviour amongst poachers is unstable unless there is a big incentive.

The work described in this post has managed to be, in more details, developed into an academic article. The article is now on a preprint server and under review in order to be published. The preprint can be found on arXiv: https://arxiv.org/abs/1712.07640.

The source code for all the numerical experiments held are online and available on Github: https://github.com/drvinceknight/Evolutionary-game-theoretic-Model-of-Rhino-poaching. Note that all source code has been developed using best practice, thus the code has been properly documented and automatically tested.

To finish off I would like to thank the co-authors for their support and explaining to me that alpha is not a:

The power of memory.