This blog post is based on a lightning talk that I delivered earlier this month in a PGR meeting at Cardiff University and it is about 3 things that fascinate me! These are:

It is built upon the article Networks of Thrones, by Andrew Beveridge and Jie Shan. In their work they created a network for each of the five books in the series of a song of Ice and Fire. Each node of the network corresponds to a character whose name (or nickname) is mentioned within the book. If two character names (or nicknames) appeared within 15 words an edge is added to connect these two characters. An edge weight was also applied based on the number of interactions of the characters. The data is open and accessible on Beveridge’s Github profile.

Once I got my hands on these data sets I decided to go ahead and perform a very brief analysis. For now I will consider only the first book of the series, a Game of Thrones. Using the Python library pandas I load the data of the first book using the following command:

Now that the data has been loaded all I have to do is create the network. For that I will make use of another Python library specialising in the creation and manipulation of networks, called networkx. Thus, creating the graph becomes trivial:

Networkx allow us to study the network structure and provides several analysis measures. The first question that arises is who is the central character of a Game of Thrones?

In graph theory and network analysis, this can be thought as the most central node. In order to verify the most central characters several centrality measures, available within networkx, will be used. Degree centrality, corresponds to the number of links connecting it to another node.

The code above returns a list of tuples with the name of the ten most central characters based on degree centrality. Thereupon, I will be using the library matplotlib to illustrate the results. 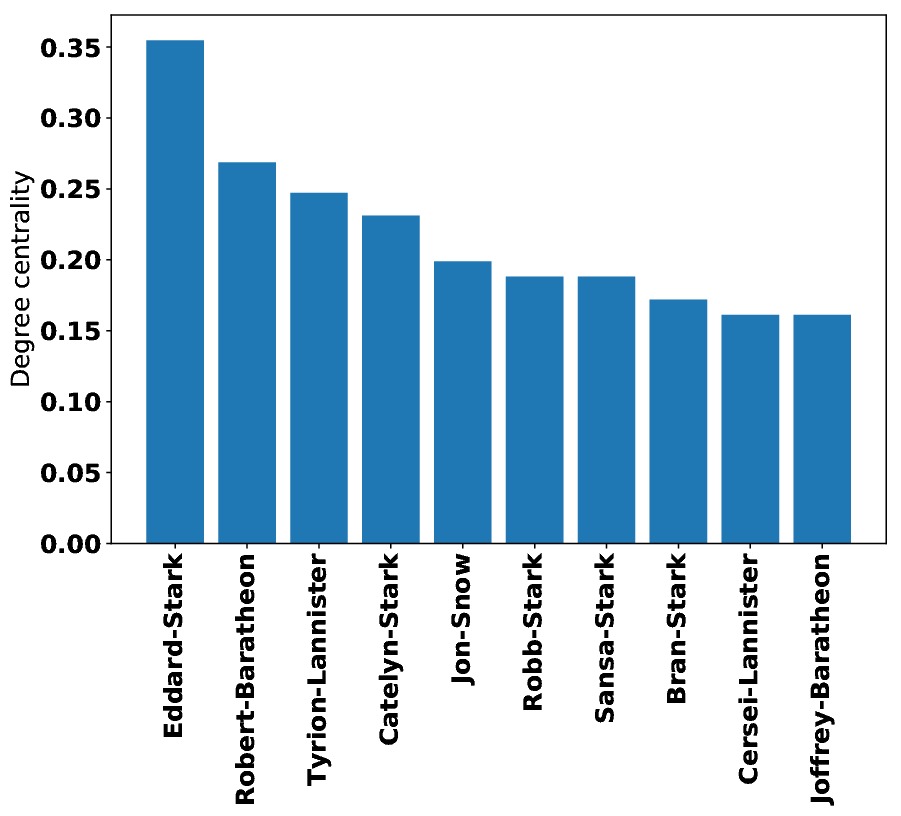 Based on degree centrality, Eddard Stark appears to be the central character followed by Robert Baratheon , Tyrion Lannister, Catelyn Stark and Jon Snow. But several measures exist, what is the difference in value between them?

The new bar plots with the importance of the top 10 characters are now given below. Though the unweighted betweenness centrality seems to have no difference to that of the degree centrality, several characters change rank based on the weighted version of the measure. Now Robert Baratheon stands out to be the most important character, Robb Stark is suddenly found in fourth place and once again Tyrion Lannister is third. 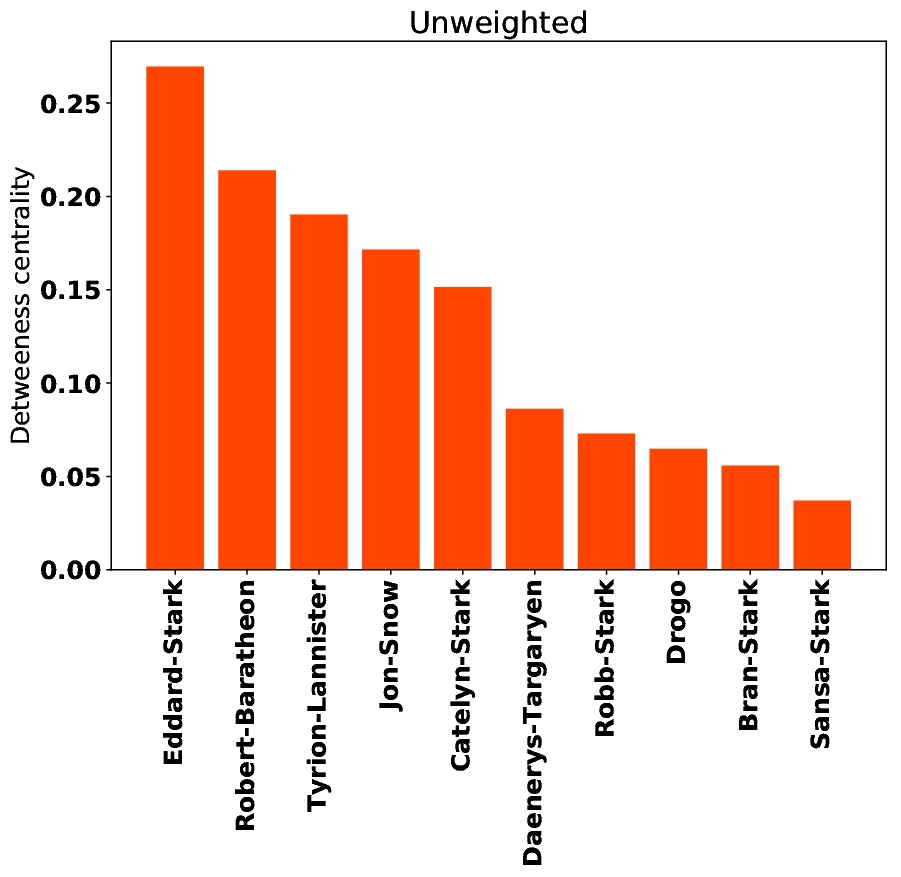 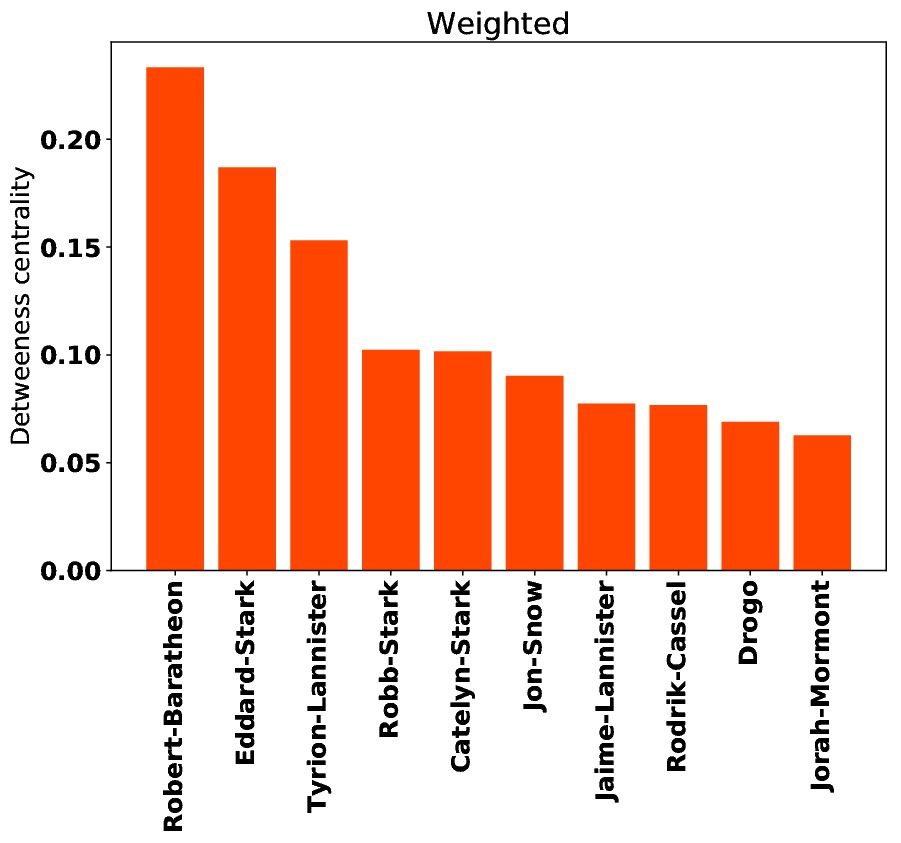 Still not convinced about the characters' importance? A third measure is examined, that is the Pagerank centrality, which is a centrality measured originally used by Google. 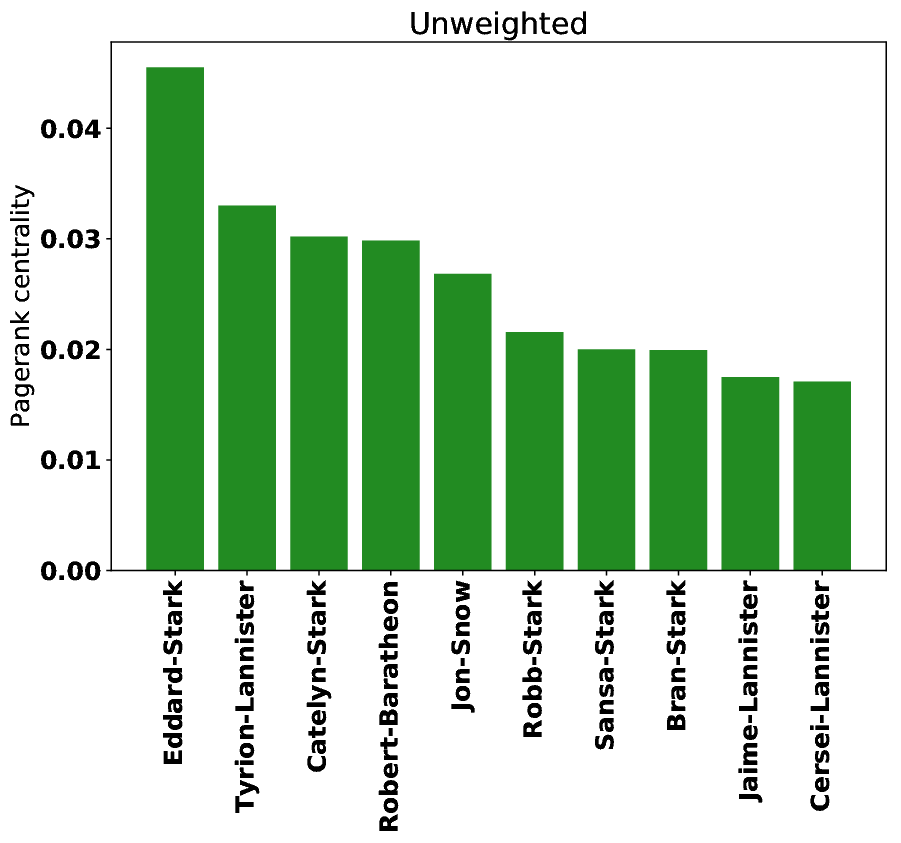 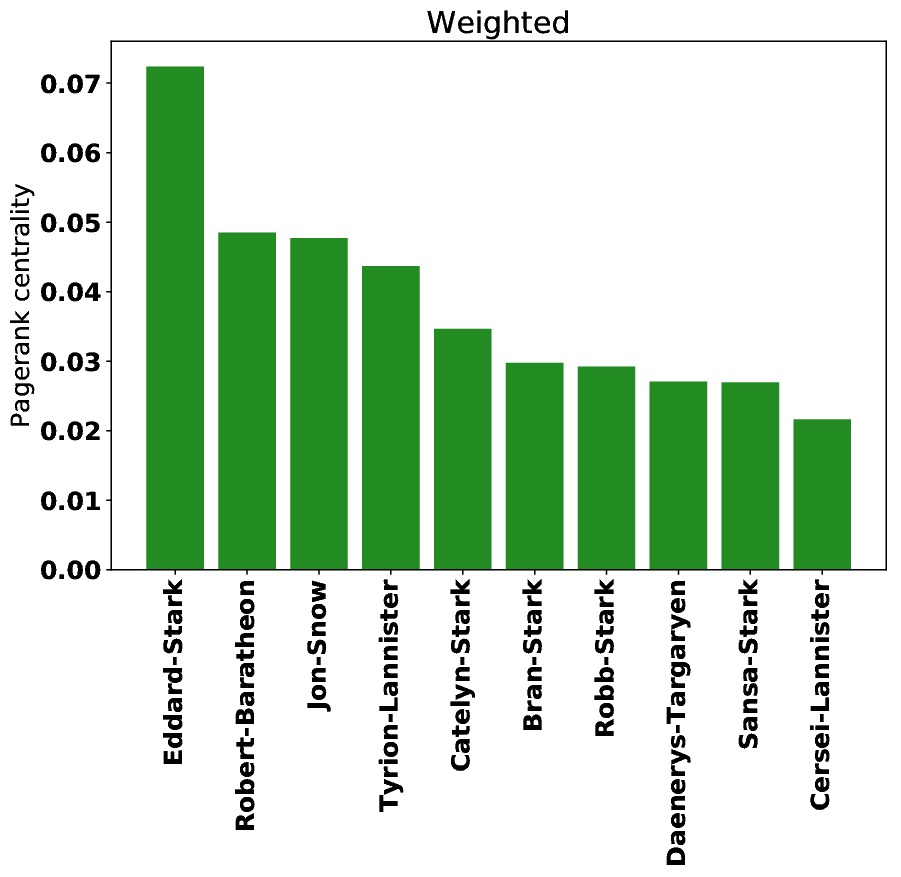 It can be seen that different measures may have a different story to tell. The measure which is more appropriate always depends on the researcher and the question that is being answered. In my research I often find myself altering between these measures for different projects. Thus unfortunately a general rule can not be applied. But based on the three measures that have been examined a character that is frequently ranked first is the honourable Eddard Stark! Having read the book and watched the TV series it is safe to argue that Eddard Stark is in fact the most central character of the book A Game of Thrones or season 1.

These insight though are just for a single book of the series and we know that not many characters make it far in the series. Could we use the measures to gain insights on the progression of a character? The answer is yes. After loading the rest of the books the weighted betweenness centrality is used to gain the centrality of each character for each book.

This data frame contains more characters whose name we can remember and a bunch of people do end up dead so let’s get ahead and look at the top 5 ranked characters and plot just their progress. 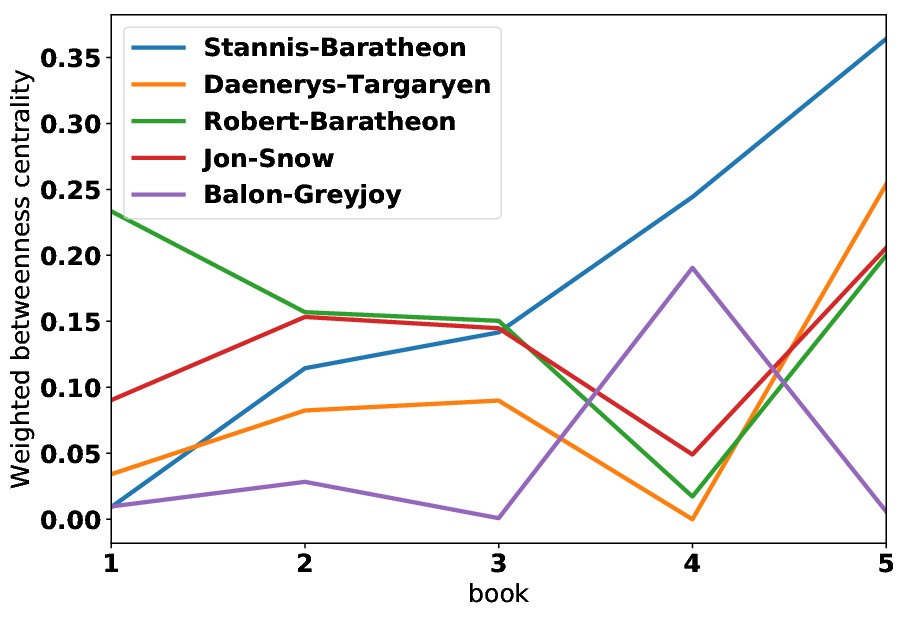 Grumpy old man Stannis Baratheon is a very minor character in the first book but that changed during the series, him claiming that he is the King and going around setting people on fire. Two other characters that developed over time have been Jon Snow and Daenerys Targaryen, both characters appear less in the fourth book where the minor character Balon Greyjoy suddenly appears from the sea. This is because the fourth book focuses on the War of the Five Kings, what’s left of it, and the Iron islands.

An efficient way of illustrating all the connections between our characters throughout the series is by drawing a comprehensive network. Can networkx be used for visualization? Well, no. At least not for such big networks as it can be seen here, 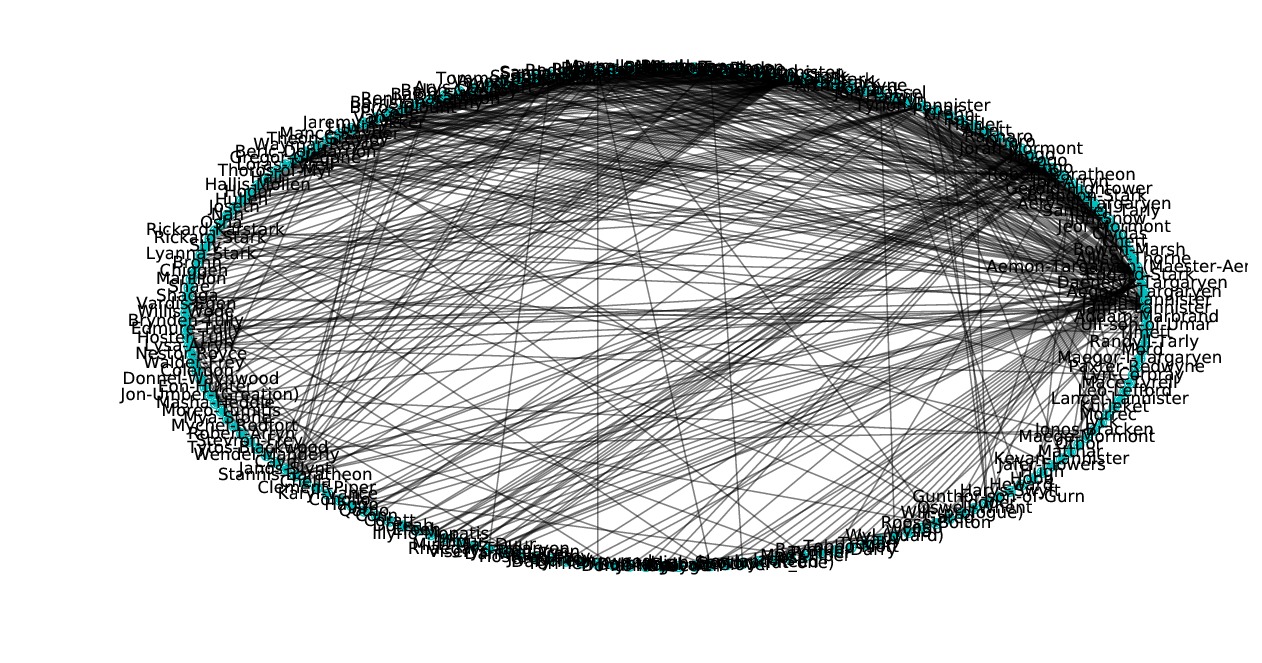 Networkx is a tool, for analysis and not for visualization, though it works very well with software that specialise on visualising networks, so no hard feelings.

This has been a very brief analysis, and mainly I would like to illustrate how Python and mathematics can be used. A song of Ice and a Fire is a book series that I enjoy but I am sure all the above are applicable to other titles as well.

The authors of Network of Thrones have performed their own analysis which can be found in their website, and I would also like to give credits to a NetworkX workshop I attended recently at EurosciPy for the inspiration for my lightning talk and blog post.